I’ve been running OpenSUSE (Tumbleweed) for some years now and KDE was my Desktop Environment of choice since years ago but before that, I was a die hard user of the Crunchbang (#!) Linux distro, which featured an awesome gray Openbox desktop. The simplicity Crunchbang offered is something that I missed during the years and after I found out that the community had revived the project in the for of Crunchbangplusplus and also Bunsenlabs, I just had to try it again but this time OpenSUSE Tumbleweed was my choice, instead of the good old Debian.

Note that this is not a full openbox install guide, as I assume you know how to install it. The default OpenSUSE installation I used here provides all the necessary low level packages like networking and xorg for example so it is simple to build from this. The theme and configurations I got should probably work fine regardless of the distro being used.

The process itself is simple and may require a bit of deeper understanding of Linux but nothing absurd. We start by having a clean install of OpenSUSE Tumbleweed but choosing Minimal X Window option in the Desktop Environment section. This should give you a usable system with IceWM installed. It also includes networking applets and other nice goodies. From here, you need to install the Openbox packages (like openbox, compton, ob-menu, lxappearance, feh or nitrogen, a sound indicator, a power manager indicator like Mate or Xfce, etc). You can also get a weather indicator if you like, maybe even the one I wrote here.

For Openbox configuration, we will rely on the stuff from Crunchbangplusplus GitHub simply because an amazing job was done porting and updating the old themes and configurations from the original Crunchbang. Keep in mind that everything we get from CBPP's repository needs to come from their branch named 9. That’ s because this branch contains fixes for Debian 9, which uses a newer version of GTK and required tweaks in the theme files among other things.

You can pick and choose what you want (from Terminator configs to Compton, conky and tint2 and more!) from the config repository. The .config folder in this repository give you a nice idea of which software me and CBPP default installation have.

In order to achieve at least the visual aesthetics, you need the Openbox theme and configs, GTK theme, tint2 and dmenu configs. Themes are located at this repo and Icon themes are here. There are some themes available for Slim and LXDM too in the same GitHub account.

The final touch is the shutdown script, that you can find here. Install it to /usr/bin and make it executable and you should be good to go. Some tweaks and Python packages might be required but those problems are pretty self-explanatory and easy to solve if you enconter any.

This is one example showing how it should look at the end (full size image): 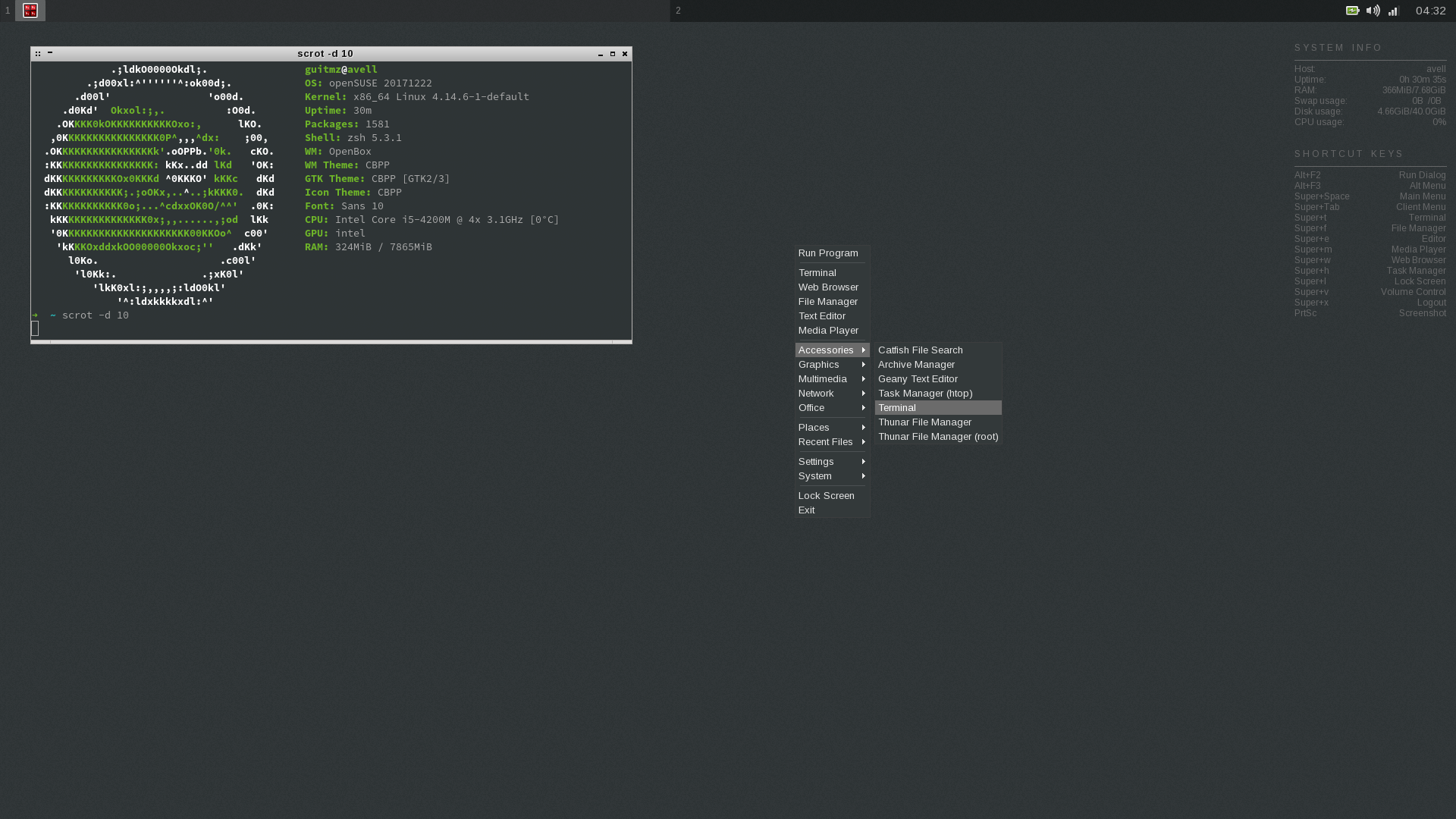